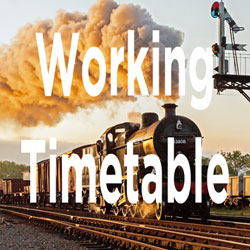 Our Steam Gala is returning for 2018, Friday 9th March – Sunday 11th March. Following the huge success of the 2017 Winter Steam Gala, albeit in horrendously wet weather at times, when the Railway played host to 2 visiting locomotives, LNER B1 Class 4-6-0 61264 and LMS ‘Crab’ 2-6-0 13065, we will once again be hosting a visiting locomotives. In 2018 we will be welcoming three guest locomotives. Part of the National Collection, ‘Britannia’ 7MT 4-6-2 70013 ‘Oliver Cromwell, from the West Somerset Railway, SDJR 2-8-0 53808 and from the East Lancashire Railway we will have ‘Black 5’ 4-6-0 44871, remaining on the Railway before venturing out onto the mainline again. 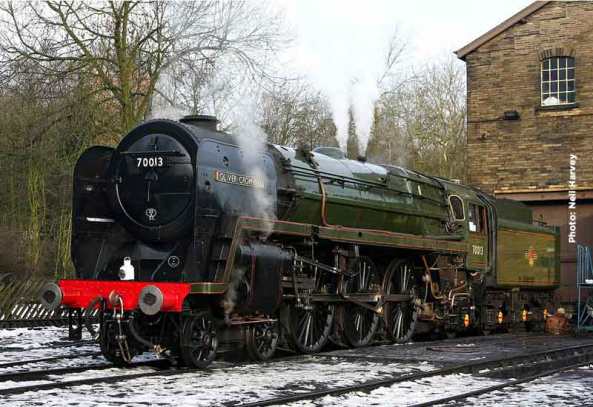 The BR Standard Class 7, known as the ‘Britannias’, was designed by Robert Riddles for British Railways as result of the 1948 locomotive exchanges undertaken in advance of further locomotive classes being built following nationalisation of the UK rail network. Fifty-five were constructed between 1951 and 1954.

70013 “Oliver Cromwell” was built at Crewe in 1951 and lasted until the end of steam being chosen to be one of the locomotives to operate the last steam passenger train known as the Fifteen Guinea Special, hauling the Manchester to Carlisle leg of the trip.

The locomotive then passed into the National Collection, initially at Bressingham, and is now in the custody of the 5305 Locomotive Association, nominally based at Loughborough on the Great Central but has been active out on the mainline for the last 10 years.

The KWVR Gala will be 70013’s swansong before withdrawal for overhaul after the expiration of its 10 year boiler certification. 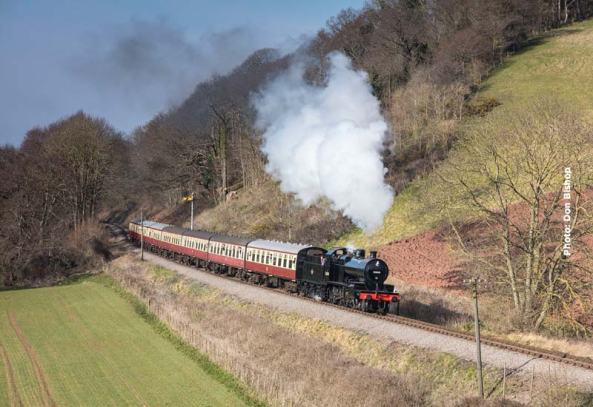 The Midland Railway (MR) were joint owners of the Somerset & Dorset Joint Railway (S&DJR) with the London and South Western Railway (L&SWR) and designed a powerful 2-8-0 locomotive to work the steep gradients of the line with heavy freight trains over the Mendip Hills, although they were also used on holidays trains between Bath and Bournemouth.. An initial batch of 6 were built in 1914 but, now owned by the LMS and SR, a further 5 were built on behalf of the S&DJR by Robert Stephenson and Sons in 1925 of Darlington.

Initially numbered 88 in the S&DJR fleet, the locomotive was taken into LMS stock in 1930 and subsequently carried the numbers 9678 and 13808 before being renumbered 53808 when the railways were nationalised. The end in mainline service came after almost 39 years service in March 1964 and like many other condemned engines was despatched to Dai Woodham’s scrapyard at Barry in South Wales, arriving there in June of that year.

Having spent over 6 years at Barry, 53808 became the 9th locomotive to be purchased from South Wales (our own 43924 being the first) when it was purchased by the Somerset & Dorset Railway Trust as part of an abortive preservation scheme at Radstock, moving to its current home on the West Somerset Railway (WSR) in January 1976. It was to be another 11 years before the engine was to steam again. It ran just under 50,000 miles on the WSR before withdrawal for overhaul in 1996. It’s first overhaul in preservation was completed in 2005 and a second in February 2016. 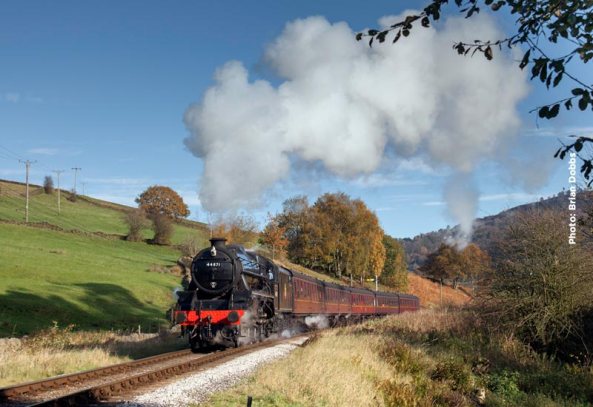 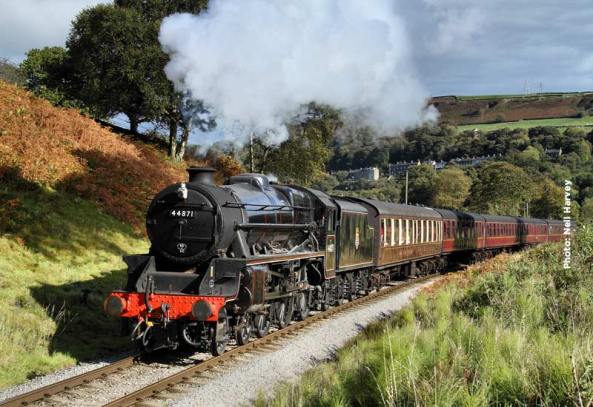 44871 is a sister locomotive to our own 45212 which is currently based on the East Lancashire Railway. Built in 1948, 44871 is one of 842 built by the LMS and of 18 preserved examples. Purchased directly out of service from Carnforth shed in 1968 and passed through various owners before being purchased by Ian Riley and returned to mainline running order.

44871 came to the KWVR on 6th October 2017 as part of the restoration agreement with Ian Riley & Sons whereby 45212, would be restored for mainline running in return for an agreed period for it, or one of Ian Riley’s own ‘Black 5’s, to be available for KWVR trains. 45212 has been out on the mainline across England and Scotland, and with a busy schedule, 44871 came in its place and will depart for its own mainline duties in the Spring.

Added to 70013, 53808 and 44871, the KWVR ‘home fleet’ will include one locomotive appearing at their Gala before withdrawal for overhaul

Unfortunately the anticipated last appearance before overhaul of WD 2-8-0 90733 will not now take place, as the locomotive has had to be withdrawn following discovery of boiler problems that will now be undertaken as part of its 10 year overhaul.

In addition the final line up will be selected from the following KWVR ‘home fleet’:

… as well as a range of different coaching stock and goods vehicles.

At every Gala we publish the working timetables which give the times of all the locomotive and train movements – passenger, goods and light engine – together with the locomotive(s) rostered to work each train. However these timetables should be used with a little caution as we cannot guarantee, given the nature of steam locomotives, that each train will run as rsotered.

New for this years Spring Steam Gala we’re offering the rare chance to travel on the Gala Goods Train!

You will travel on the Goods train from Keighley to Oxenhope behind one of our locomotives on the Gala. The trip will depart Keighley early morning each day, with an additional ‘Cromwell Goods’ on Sunday evening. The morning trips are all scheduled to do a full return trip of the Railway with a banking locomotive added at Haworth Loop, before that locomotive returns you to Keighley.

These trips are hauled by visiting 7F 53808 on Friday and Sunday, with home based 5820 hauling a train that it was designed for on Saturday. 70013 Oliver Cromwell is booked to work the Sunday evening trip (Please note that this is a one way evening trip, no return, so we would advise parking at Oxenhope).

To book your place in the Goods Train Brake Van, book online HERE>>>

Please note that locomotives are subject to change. Brake Vans are not as comfortable as passenger carrying vehicles and can jolt. You must be medically fit, free of any health problems that could be affected by the rougher nature of the vehicle. You will be asked to sign an indemnity form by the host on arrival who will give you instructions for the trip.

Dark clothing should be worn, no high visibility vests.

Throughout the weekend we will be running a mixture of different coaching sets, with our RMB real-ale bar car in use, as well as our BR(E) Suburban ex-Kings Cross stock. Coaches from the Lancashire and Yorkshire Railway Trust and Vintage Carriages Trust will also be in operation.

Tickets are available to purchase on the day from booking offices and, with the exception of the advertised Brake Van Rides, are not bookable in advance.

Don’t forget that your Rover tickets allow entry into both museums at RAIL STORY, Ingrow where the Museum of Rail Travel and Ingrow Loco can be found

Once again we will be running our unique tour behind the scenes in our engine shed and workshop at Haworth, the tours being led by our experienced and knowledgeable volunteer tour guides,. The tours are organised to raise funds to restore the Ivatt 2-6-2T 41241 and although the tours are free, we do ask our guests to consider making a Gift Aided donation, usually in the region of £5 to the KWVR Charity (no 1136853).

Inside the shed you will see Standard 2 78022, Ivatt 41241 and Lancashire and Yorkshire ‘Ironclad’ 0-6-0 no. 957, The Green Dragon in the film The Railway Children, undergoing restoration – and maybe more.