26th September was a real red letter day for the Railway when over 700 walkers taking part in the Starlight Hike, raising funds for the Sue Ryder Manorlands Hospice, were carried aboard the Starlight Express from Oxenhope Station to the starting line at Oakworth. Packing the walkers into one train, commuter style, was hardly an option given the fact they had to then walk back to Oxenhope, so 2 trains, featuring top and tailing with a diesel locomotive at the north end and steam at the south, were run to ensure everyone arrived in fine spirits.

Hayley Ibbotson, Senior Hospice Fundraiser at Manorlands said ‘It was such a brilliant night and we’ve received some great feedback about the event. People loved the Starlight Express element and everything went really smoothly. Once all pledged sponsorship is received we hope to have raised in the region of £35,000 for Manorlands Hospice, which is a fantastic amount, and will make such a difference to our patients and their families. I must say a huge thank you to everyone who supported the event and especially to the Keighley and Worth Valley Railway for all the wonderful help they gave us in the lead up to and on the night itself, it is much appreciated.’ 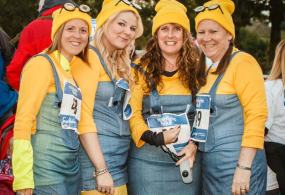 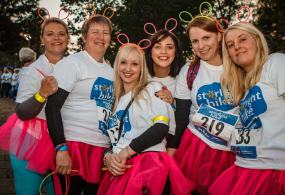 Manorlands is a charity very close to the hearts of the Railway and, with a Haworth Haddock in July dedicated to fundraising plus the Starlight Express, it is planned that there will be more fundraising activities on the Railway in future – look out at the Beer & Music Festival.