Mike Tarran reports that the Railway was visited this week by a tamper from Volker Rail as part of a training exercise for their operatives. We reported earlier on the Civil Department’s possession of the running line at Bridge 17 between Oakworth and Haworth and to the south of  Haworth at Haworth top points and this exercise was to tamper these two sections that had been re-laid during Civil Week.

Monday started badly with arrival from York delayed until late morning due to power cut on the mainline. However the machine was soon getting into its stride and the section around Bridge 17 took a mere 2 hours to bring the line up to an excellent standard 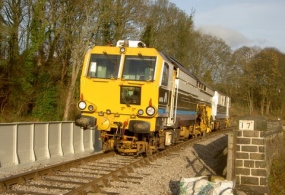 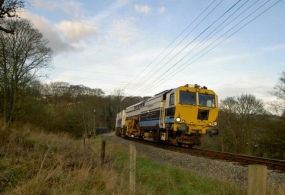 Due to a mechanical problem the unit was not able to operate until Thursday morning when, in miserable and misty conditions, the route around Haworth top points received attention.

The final photograph shows the Thursday Civil Gang walking towards Oxenhope for their daily task, not, as reported by Steve Harris, downing tools and walking off site having been issued with their redundancy notices, their job on the Railway, in future, being undertaken by modern mechanical machines.