On the 20th May we reported on the ceremony to dedicate two locomotives, WD 2-8-0 90733 and USATC S160 2-8-0 5820, in recognition of the thousands of similar locomotives and railwaymen that played their part in World War 2. Click here to see the report of the dedication ceremony

For the second year in succession, 90733 was temporarily named ‘Remembrance – Lest We Forget’ and both engines carried commemorative wreaths on both days. Throughout the weekend, whilst Haworth bathed in the Spring sunshine and revellers enjoyed the atmosphere in period costumes, the Railway ran a two train service ferrying passengers through the “war torn” Worth Valley. 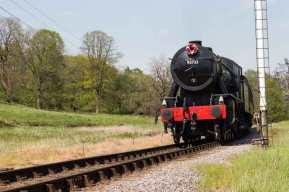 Below is Penny Steam’s preview video of the weekend’s railway activity.

For the full version of the day’s railway activity, click here.